We stock a good range of commonly used cutting tools.

A bit of information about cutter choice:

The blades- these are commonly referred to as wings, edges or flutes. . The wing is the blade, the flute or gullet is the clearance channel behind the blade.

These terms are often mixed up when people talk about cutters but basically refer to the number of cutting edges per rotation that the tool has.

Most people think of a router cutter as a straight edged cutting tool as used in most hand controlled routers. A tool for hand use should have chip limiting to stop kickback, whereas a cnc cutter may not have this so can take bigger chips per tooth. Advanced cnc grinding techniques have allowed vast improvements to edge finish by introducing spiral bladed cutters. See below.

Use a standard router cutter? or maybe not!

A lot of tooling made for hand held routing is not suitable for use in a CNC ROUTER!

For a cnc router the shank and tool needs to be able to stand up to the high pressures of the sideways force that a cnc router can "push" the tool through the work.

A good quality, fast cutting tool will be solid carbide and ground to its shape . Not brazed on tips onto a soft shaft ( like a kitchen worktop cutter) 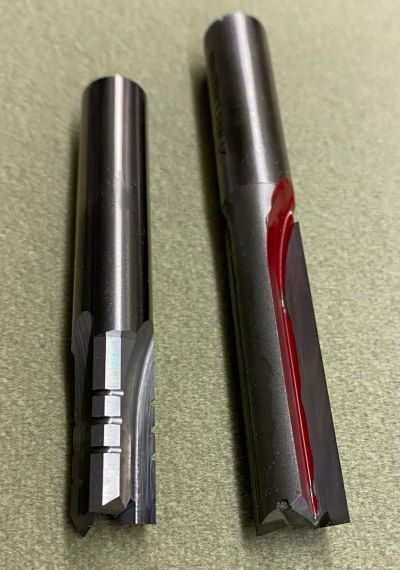 The pictures show the difference of a solid carbide tool next to a long welded blade type. 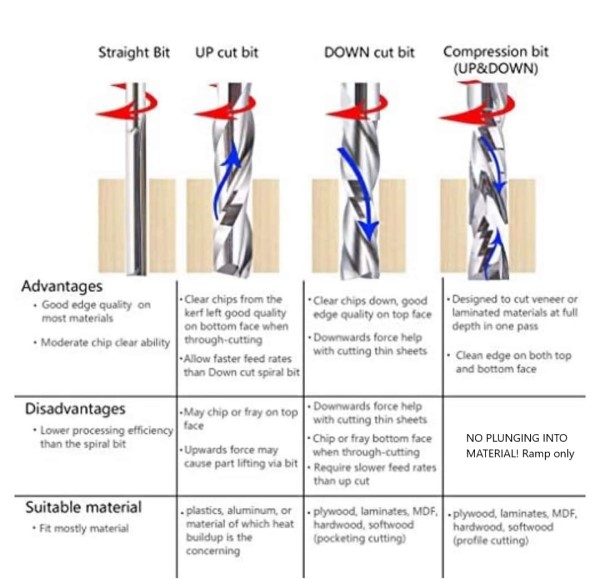 As the cutter spins clockwise it shears the fibres of the material in an upwards direction. 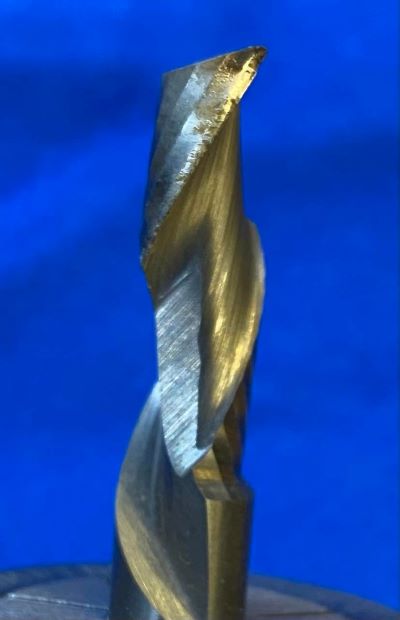 This gives the best chip evacuation from the job by dragging the chips upwards out of the work towards the extraction point.

The speed of cut can be increased with more blades per rotation added.

Hence a 3 wing cutter can cut 1/3 faster than a 2 wing cutter. The flutes can also be equipped with chip breakers for even faster cutting - (serrations that cut smaller chips instead of a constant planed chip) at the expense of edge finish.

These are often used for roughing operations where material needs to be removed as quick as possible.

Feed Speed of each cutter can be calculated by maximum chip load per tooth for the desired feed rate your machine is capable of . You should always aim for chips to be released from the cutter not dust. Dust is a sign of too low a chip load which blunts the tool way faster.

Note . An up cut spiral will leave the top surface of softer materials ( like plywood) rough as it drags the fibres upwards.

These tools can be used for drilling operations .

This is the tool of choice for a cut that does not go all the way through the job ( on softer materials) As it rotates clockwise it shears the chips off in a downward direction. 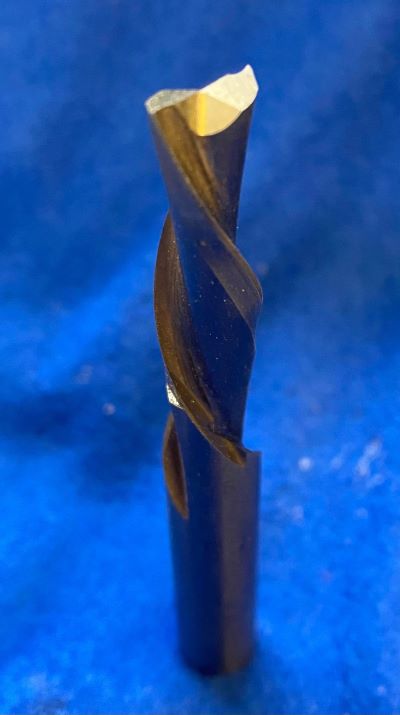 This will give the best top surface edge finish .

The disadvantage of this is that the chips get compressed into the work and not evacuated to the extractor.

For this reason Never drill with a down cut spiral !!!! ( fire risk )

The tool of choice for cutting timber sheet materials.

The compression spiral spinning clockwise has both up cut spiral at the bottom and down cut spiral on the higher part of the flutes. 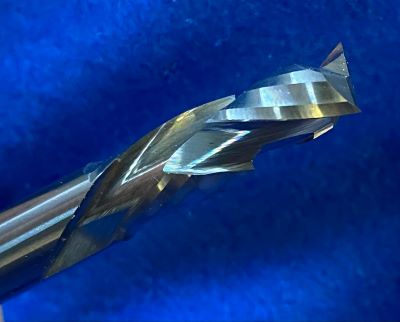 This gives a clean top and bottom edge to the material by shearing the surfaces towards the centre of the board.

This also compresses the chips into the centre of the board if slot cutting ( profiling with no clearance) .

This has advantages and disadvantages.

The disadvantage being that the chips are not extracted easily . (Causing heat build up)

For this reason - never drill with a compression spiral !!!! ( massive fire risk )

The first pass depth of compression cutters should be at least the depth of the up cut section/down cut section join so the top surface of your work is not pulled upwards.

WARNING: never use down cut or compression for drilling: WARNING FIRE RISK !

(note the repeat) It doesnt matter how many times people are told - they still do it!

A straight cutter has the blade geometry cut straight along its axis. 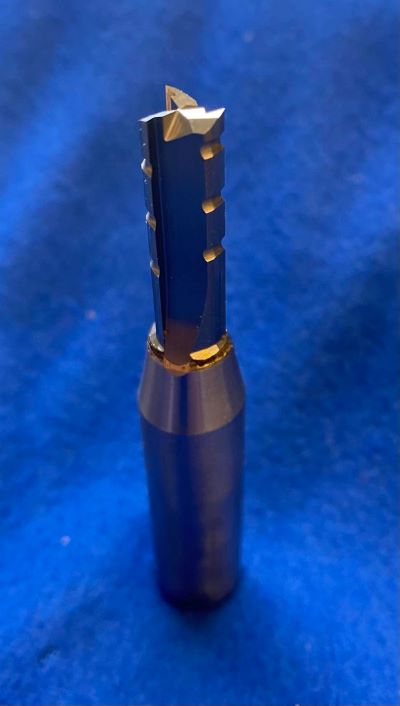 This would be classed as a standard, general purpose cutter but without the special features the spirals can give.

It gives a reasonable finish to the "wall" of any cutouts.

It is a good tool for "pocketing" operations .

The tool of choice on hardwoods . The picture shows straight with chip breakers.

Conservative feeds and speeds should be supplied by your tool supplier as a starting point .

Feed speeds will depend on material , machine stiffness, cutter diameter ( flexing) and depth of cut per pass etc .

Experimenting on a similar piece of material with variations will give you the best results before you cut your real job.

Our online store will be up and running shortly. Huge stocks available.

How to load a tool into a collet- the correct way! 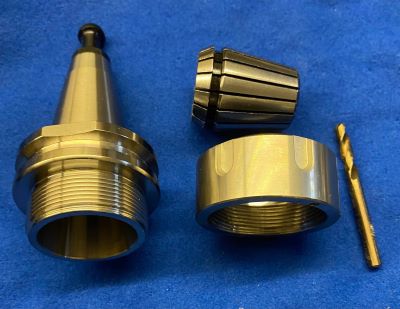 The photo shows the components of an iso30 tool chuck.

The loading of a collet is the same for a maual spindle.

The collet must be clipped properly into the nut- so when removing, the nut draws the collet out of the chuck or spindle as the nut is unscrewed! 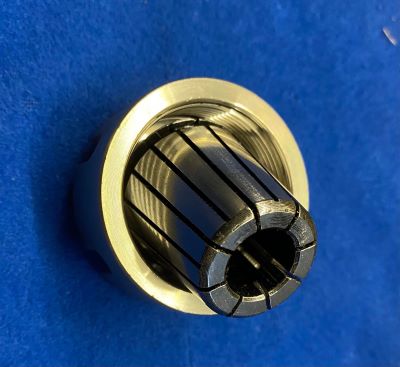 Tilt the collet to one side so the clip ring engages

(to release a collet from the nut, tilt the collet back to this position) 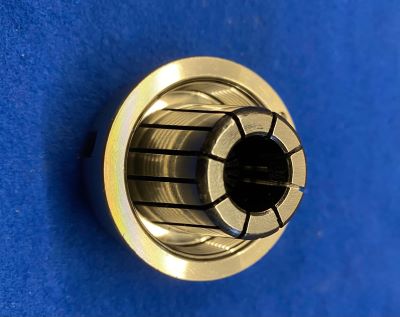 Then with firm pressure on the collet push into the upright position. This allows the clip ring in the nut to fully grab the collet. 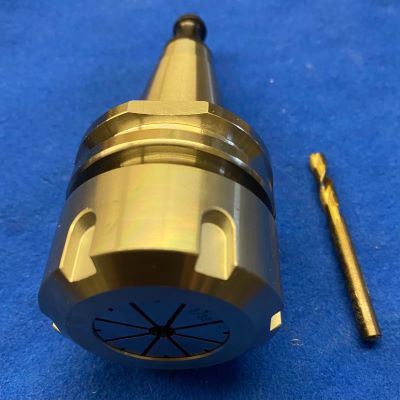 Once the collet is fully engaged in the nut, the nut can be threaded onto the chuck / spindle. Do not tighten yet. 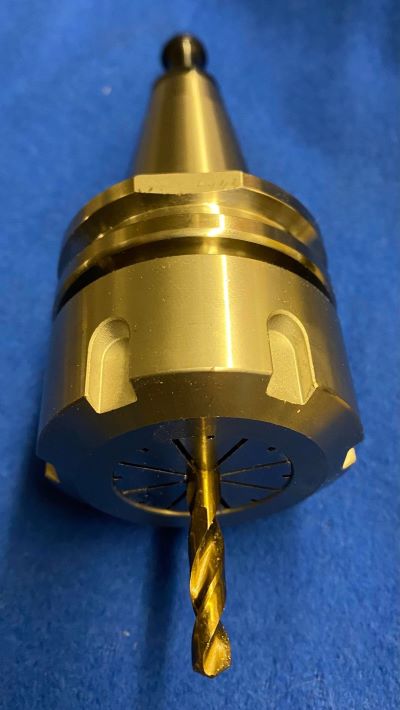 Now insert your tool into the collet and tigten the nut lightly by hand. Position your tool at its shortest length sticking out from the collet. ( always clamping on the tool shank, not its cutting area)

Fully tighten using your c spanner and you are ready to go!

Whats the difference between the amount of blades on a tool 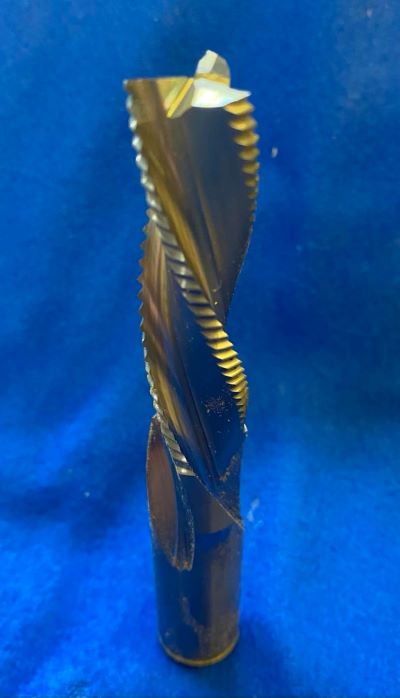 A CNC Router cutter can have up to 4 flutes as standard. 3 Is the maximum recommended for woods and plastics for the reasons below.

Has only 1 cutting edge per rotation. These tools often have the largest "flute" to evacuate the chip from the cut. 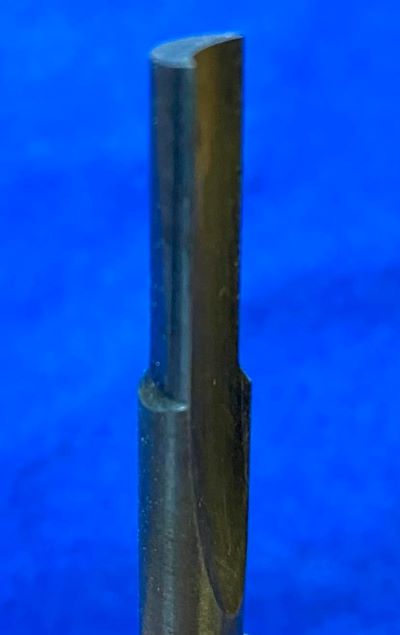 As less material is removed from the cutters geometry it can be pushed very fast through your material without flex. The resulting chip per tooth can be quite large as it has plenty of flute clearance behind the blade.

The edge finish can often suffer if the feed speed is too high and will show as scallops from the cutting action.

This type of cutter is great for perspex and plastics as they require good chip evacuation to stop re cutting of chips which can cause high temperature re melt.

Has 2 cutting edges per rotation.

This would be classed as a general purpose tool that gives a reasonably good edge finish in wood based products.

The chip size is 1/2 that of a 1 flute tool at the same rpm and feed speed. As more material has been removed from the tool geometry ,these tools can flex more if pushed hard.

Has 3 cutting edges per rotation.

This would be classed as a special purpose tool that gives an excellent edge finish in wood based products.

The chip size is 1/3 that of a 1 flute tool at the same rpm and feed speed. As more material has been removed from the tool geometry , These tools can flex more if pushed hard. The shank size is often increased on these tools to allow faster cutting without flex at the shank area.

Has 4 cutting edges per rotation.

Often referred to as an end mill. 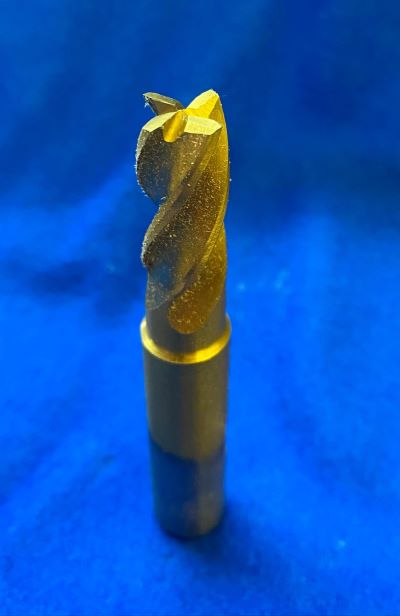 The clearance behind each blade is very small on these cutters so used primarily on harder materials where the chip size is very small ( ie STEELS etc) A cnc router is not suitable for steel cutting.

Due to the poor chip evacuation on these tools they are not recommended for high speed cutting unless being used solely as a final finishing tool.